The topic of this seminar was to prove the existence of God the Mother in the various fields of academic studies. Until now most of the Christians knew God as only God the Father. However, Genesis in the bible records God in the plural form ‘US’, not in the singular form. When He created mankind, God said, “Let us make man in our image and in our likeness”. And God created man as male and female. Also, in Revelation 22:17, the last chapter of the bible shows that God who gives the water of life is “the Spirit and the Bride”. And the bible testifies about God the Father and God the Mother, saying, “Our Father in heaven,” (Matthew 6:9) and “But the Jerusalem that is above is free and she is our mother”. (Galatians 4:26)

Like this to prove the existence of God the Mother through various fields of academic studies was new and fresh not only to the Christians, but also even to the common people.

The Key for the Spiritual Paradigm “God the Mother”

The seminar was composed of three sessions: the Principles of Nature and Paradigm, Science and Medical Science, Culture/Art and Technology. The first speaker of Session 1, Jennifer Grace Traeger (USA), a specialist in special education made the presentation in the topic of “God the Mother in All Creation”. She explained, “Amniotic fluid made from the blood of the mother protects the fetus and connect the mother and the fetus and helps the fetus to keep the constant body temperature. Also a mother have a great influence on the baby in developing muscles and teaching the baby the way to breathe through the lung”. By quoting, “God’s eternal power and divine nature have been clearly seen, being understood from what has been made,” she said, “All the creation in the world is a textbook to make us understand God the Creator. Through this we can know the words of the water of life from God the Mother will give true happiness to mankine”.

The second speaker, Luis Felipe Osorio, the CEO of Group SBN (Peru) gave a presentation on the topic, “Paradigm and God the Mother”. To prove his argument, he used the case study of Kodak which had dominance over the film camera business for about 100 years. Mr. Osorio ascribed the fall of Kodak to failing to break the paradigm of film”. He argued that the bottom line is to break the old mindset, blaming overconfidence, the lack of vision, and arrogance. He gave examples of refromers who could break the old way of thinking such as Henry Ford of the Ford Company, Steve Jobs the Founder of the Apple Company, J. K. Rowling the Writer of the Harry Potter series. Also he emphasized that Peter, Paul, and John who received Jesus who appeared as man 2000 years ago were the spiritual reformers unlike the Jews of the time. They have one thing in common, that is, that they could create a new value without being trapped in the paradigm of the time.  Mr. Osorio argued, “In our time, God the Mother is the key to open a new paradigm and those who receive the key and create the new paradigm are the true reformers”.

The Integrated Circuit of Eternal Life “God the Mother” 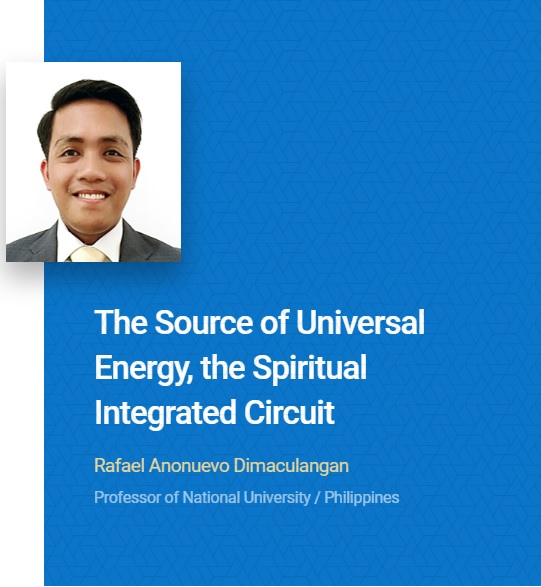 Raphael Anonuevo Dimaculangan, An Electronic Engineering Professor in Philippine National University opened the second session with the topic of “The Source of Energy in Universe, Spiritual Perfect Circuit”. What is most necessary for various new scientific products such as cellphones, wireless communications, automobile industry, state-of-the-art military weapon, satellite is ‘integrated circuit’. An integrated circuit, a.k.a microchips is similar to the CPU of computer. Just like a CPU runs the computer hardware which is just a lump of metal, without an integrated circuit, there is no cellphones, wireless communications, car industry, advanced military weapon, satellites. This is the energy source which became the foundation for the modern industrialization.

He said that the spiritual world is the same and there is a spiritual integrated circuit which delivers and utilizes the energy to all creation. He emphasized that God the Mother works in that way, “2000 years ago God came down in the name of Jesus. Likewise, The power for the spiritual life of 7 billion people of the world comes from God the Mother”.

“God the Mother,” the Great Creator of the Salvation of the 7 Billion Mankind

The beginning of Session 3 was made by Fulu Mugovhani, a movie actress from South Africa. She came to realize the importance of the playwright while she has been working in a various movies. She said that the script made by the playwright is the core of a movie which is composed of actors, script, director, camera, lights, etc in her speech, “the Great Playwright”.

“Playwright is spelled, not ‘Write”, but “Wright” in English. Etymologically, ‘Wright’ means ‘Maker’ or ‘Builder’. This means it is the playwright who makes and build the whole movie.” And she continued,” Then who is the playwright who makes a plan for our life, not a movie?” Quoting, “For every house is built by someone, but God is the builder of everything,” Mugovhani pronounced, “The spiritual playwright who design the life of 7 billion from the beginning to the end is God the Mother. God the Mother is the one who knows us who are living as actors.” And she added, “Those who received God the Mother is the protagonists of the script written by God and the ending is the eternal salvation.”

The last presenter was Juan Carlos Marquez, the Coordinator of Red Cross in the city of Queretaro Mexico, who led the speech with the topic of “The Mind of God the Mother I Realized through the Study of My Heart”. He said, “The most perfect woman in the world is a mother”. “A mother protect the baby with her own body and gives life to the child by sacrificing her own life. Likewise, God the Mother bears and gives life to the children through her love and sacrifice, and she raises and protects them. The most perfect being in the birth of life is none other than God the Mother”.

Those who attended the seminar said that it was more reliable to realize God the Mother through the official seminar with various professional topics. Pablo Andres, who is working in the field of A.I. in Chile said that he had more interest in the topic, “A.I. and God the Mother”. Also he said that this seminar was a landmark experience on the road to seek God, who is the way of eternal happiness and heaven for all mankind.