Heavenly Wedding Banquet–The Bible teaches us the spiritual world through many things. One of the ways is through a parable. God uses parables to reveal the secret of the kingdom of heaven only to the children of God.

Matthew 13:10 The disciples came to him and asked, “Why do you speak to the people in parables?” 11 He replied, “Because the knowledge of the secrets of the kingdom of heaven has been given to you, but not to them.”

What is the secret behind the parable of the heavenly wedding banquet?

The Parable Of The Heavenly Wedding Banquet

Therefore, as children of God we have to open our spiritual eyes and ears. And we have to listen to the teachings of God in those parables. Then now let us study a parable of the heavenly wedding banquet. And let us find out the existence of God the Mother who would give eternal life.

A Secret Of Heaven In A Parable

The bible teaches us that each parable contains a deep secret of the Kingdom of heaven that we have to know to enter the kingdom. When we have a key to a house, we can open its door and enter. Likewise, the secret hidden in the parable works like a key. Therefore, if you know the secret of the parable, you can use the secret as key to enter heaven.

The Parable Of the Wedding Banquet

Matthew 22:1~10 Jesus spoke to them again in parables, saying: 2 “The kingdom of heaven is like a king who prepared a wedding banquet for his son. 3 He sent his servants to those who had been invited to the banquet to tell them to come, but they refused to come. ….. 8 “Then he said to his servants, ‘The wedding banquet is ready, but those I invited did not deserve to come. 9 So go to the street corners and invite to the banquet anyone you find.’ 10 So the servants went out into the streets and gathered all the people they could find, the bad as well as the good, and the wedding hall was filled with guests.

Then what is the hidden secret in this parable of the heavenly wedding banquet?

The Absence Of the Bride

Jesus compared the kingdom of heaven specifically to a wedding banquet. Why not a birthday party? Why not just a party for the son? There could be many different reasons for the celebration. However, the bible specifically says that this celebration was thrown for the wedding of his son. Therefore, we have to think carefully about a wedding banquet to figure out the reason.

However, reading from the beginning to the end, we cannot find any mention of the bride. Then can we say that the bride is not necessary? Definitely not. If there is no need of the bride, God would not use a parable of the wedding banquet. Rather, He would compare the kingdom of heaven through a parable of the birthday party. In that way, the son and the guests would be enough for the parable.

The Appearance Of the Bride

Who Is The Bride Of Christ?

For this reason, Finding out the identity of the bride is most important in this parable. Then who is the bride? When would she appear? Many might think this would be very easy to answer. The bride is the saints or the church. If then, who would be the guests or those who were invited to the banquet?

In another parable of the heavenly wedding banquet, Jesus clearly teaches that the guests are the saints of God.

Mark 2:18 Now John’s disciples and the Pharisees were fasting. Some people came and asked Jesus, “How is it that John’s disciples and the disciples of the Pharisees are fasting, but yours (Jesus’ disciples) are not?” 19 Jesus answered, “How can the guests (Jesus’ disciples) of the bridegroom fast while he is with them? They cannot, so long as they have him with them. 20 But the time will come when the bridegroom (Jesus) will be taken from them, and on that day they will fast.

The Time For the Appearance Of the Bride

To find out the identity of the bride, we have to go back to the bible? Let us first think about the appearance of the bride. When would the bride appear? To find an answer for this question we have to ask another question? Whose bride is she in the parable of the heavenly wedding banquet? She is the bride of the Son of God, that is, Jesus, right? Since she is the Bride of Christ, she would appear with the Christ himself.

2000 years ago when Christ came, however, he did not come with his bride as we have seen through the parable of the heavenly wedding banquet. Therefore, we can conclude that the bride would appear when the Christ comes for the second time. The bible teaches us that the Christ would appear for the second time for our salvation. (Hebrews 9:28) Consequently, it would be natural to conclude that he would appear with his bride in his second coming. 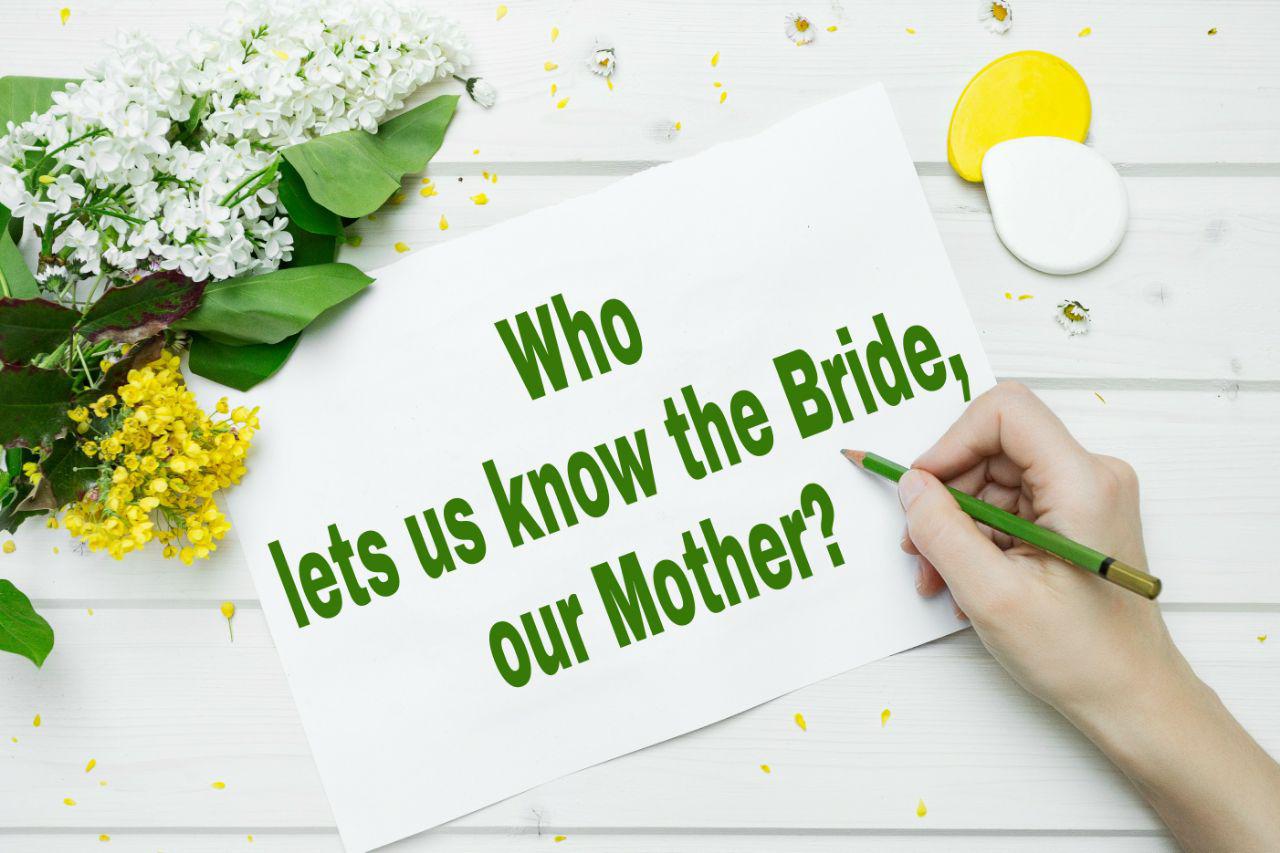 Who is the true bride of Christ in the Book of Revelation?

The Appearance Of the Bride In the Last Day

The Completion Of the Heavenly Wedding Banquet

Apostle John saw the vision of the end time and recorded the Book of Revelation. In that book, he describes the Christ’s coming for the second time to give us salvation. When he comes, the bible says that he would complete the heavenly wedding banquet by coming with his bride.

Revelation 19:7 Let us rejoice and be glad and give him glory! For the wedding of the Lamb (Jesus Christ) has come, and his bride has made herself ready. 8 Fine linen, bright and clean, was given her to wear.” (Fine linen stands for the righteous acts of God’s holy people.) 9 Then the angel said to me, “Write this: Blessed are those who are invited (the guests) to the wedding supper of the Lamb!”

2000 years ago, Jesus taught the kingdom of heaven through the parable of the heavenly wedding banquet. In that parable, there was one secret, that is, the identity of the bride of Christ who would work as the key for heaven when revealed. However, she was the hidden secret at his first coming. Finally, in the last days, the bible teaches that the heavenly wedding banquet would be made complete through the appearance of the bride, the secret of the parable. In the Book of Revelation, we can see the appearance of the bride of Christ.

Through the appearance of the bride of Christ, finally all the components for the heavenly wedding banquet are present. We have the bridegroom (Jesus the Son of God), the guests, and the bride who is the last secret of the parable.

The Bride Of Christ, God the Mother

Revelation 21:9 One of the seven angels who had the seven bowls full of the seven last plagues came and said to me, “Come, I will show you the bride, the wife of the Lamb.” 10 And he carried me away in the Spirit to a mountain great and high, and showed me the Holy City, Jerusalem, coming down out of heaven from God.

Then what was the reality of the temple God wanted to teach us through the physical temple on this earth? What was the true spiritual temple?

In this scene, we can witness the existence of two different temples. Jews were speaking about the physical temple Jerusalem in the city of Jerusalem. But Jesus was speaking about the reality of the temple, that is, the body of Christ. Jesus was teaching them that wherever the Spirit of God is that place is the temple of God. God once put His Spirit in the Jerusalem Temple. And there on the throne of God between the cherubim, He worked for his people as spirit.

However, when he came down to this earth in the name of Jesus, God put His Spirit in the body of Christ. Since then, the body of Christ became the temple of God. Now, we can see the physical and spiritual temple at the same time in this scene.

Interpretation of the Spiritual World

In the verse above we are watching the physical temple Jerusalem and spiritual temple of God right in front of us. Then can we find any similarities between them? Do they look alike in any way? Is there any physical resemblance between them? Not at all.

It is the same with us. We must open our spiritual eyes and should understand the spiritual meaning behind the parable. We should not think a huge building would come down from heaven as the bride of Christ to give us salvation.

The Reality of the Heavenly Jerusalem

Galatians 4:26  But the Jerusalem that is above (in heaven) is free, and she is our mother.

Then why should our Mother appear as the bride of Christ in the last day?

Hebrews 9:28 so Christ was sacrificed once to take away the sins of many; and he will appear a second time, not to bear sin, but to bring salvation to those who are waiting for him.

Christ would come for the second time to give us salvation. In the same way, to give us salvation God the Mother is coming down from heaven to us too. Without the appearance of the Bride God the Mother, the heavenly wedding banquet cannot be made complete. And without the completion of the heavenly wedding banquet, the guests or God’s people cannot receive salvation.

God the Mother, the Key in this Parable

In this sense, we can see the last hidden secret of this parable of the heavenly wedding banquet. It means God the Mother is the key for the entrance of the kingdom of heaven. Therefore, without heavenly Mother we cannot receive the salvation of eternal life.

Finally, to complete the heavenly wedding banquet, God the Mother the heavenly New Jerusalem came down to us. And she is calling us to come to receive the eternal life.

Come to the Spirit and the Bride for the water of life. Receive Heavenly Jerusalem our Mother because she is the one who gives us eternal life.

43 thoughts on “The Parable Of The Heavenly Wedding Banquet”