In this article, I would like to show some of the features of Melchizedek that we must know to understand the true Melchizedek in the bible correctly.

Melchizedek From A Gentile Nation–Among the many characteristics of Melchizedek, I would like to show the place of origin for Melchizedek. The Bible divides peoples into two categories: Jews or Gentiles. Jews or Israelites represent God’s chosen people. On the contrary, the Gentiles are all the people of the world who do not belong to God.

Melchizedek From A Gentile Nation–Jews came from Abraham’s line. Abraham was the person who received God’s promise as the forefather of God’s children. The Book of Genesis describes God’s calling of Abraham in a detailed manner. When God called Abraham, he gave this promise to Abraham.

Genesis 12:1  The Lord had said to Abram, “Go from your country, your people and your father’s household to the land I will show you. 2 “I will make you into a great nation, and I will bless you; I will make your name great, and you will be a blessing. I will bless those who bless you, and whoever curses you I will curse; and all peoples on earth will be blessed through you.”4 So Abram went, as the Lord had told him; and Lot went with him. Abram was seventy-five years old when he set out from Harran.

Later, when Abraham obeyed God even in the sacrifice of his only son, God blessed him more significantly and confirmed his promise to Abraham.

Genesis 22:16  and said, “I swear by myself, declares the Lord, that because you have done this and have not withheld your son, your only son, 17 I will surely bless you and make your descendants as numerous as the stars in the sky and as the sand on the seashore.

The Descendants Of Abraham

Melchizedek From A Gentile Nation–According to this promise of God, God blessed Abraham and his descendants to form the nation of Israel or the Jews.

Abraham gave birth to his son Isaac: Isaac, to Jacob; Jacob, to his 12 sons, each of whom became the forefather of each tribe of Jews. These sons of Jacob and their descendants later became the nation of Jews or the chosen people of God. That is the reason why Abraham can be called the forefather of the Jews because the Jews all came from one ancestor, that is, Abraham.

A Gentile Who Worshiped God

Melchizedek From A Gentile Nation–In the time of Abraham, the Jews were not formed yet, and in the words of Paul the Jews were “still in the body of their ancestor (Abraham).” At this moment, the only Jew was the ancestor Abraham himself. Therefore, all other people except for Abraham could be considered as Gentiles.

Melchizedek from a Gentile nation

At that time of Abraham, there was a man or more precisely a Gentile who knew and worshiped God. The name of this Gentile was Melchizedek who blessed Abraham in the name of God.

Genesis 14:18  Then Melchizedek king of Salem brought out bread and wine. He was priest of God Most High, 19 and he blessed Abram, saying, “Blessed be Abram by God Most High, Creator of heaven and earth. 20 And praise be to God Most High, who delivered your enemies into your hand.” Then Abram gave him a tenth of everything.

The Bible says that Melchizedek was a priest of God who gave a sacrifice to God with bread and wine. It was a unique way in the worship of God. In the Old Testament, we can see many who worship God with animal sacrifice. Probably this was the most common way of worship since the time of Abel, the son of Adam. (Genesis 4:4) Throughout the Old Testament, a shedding of the blood of animals was crucial for the worship of God. At this time, it was unusual practice to worship God with bread and wine like Melchizedek.

Hebrews 5:8  Son though he was, he (Jesus Christ) learned obedience from what he suffered 9 and, once made perfect, he became the source of eternal salvation for all who obey him 10 and was designated by God to be high priest in the order of Melchizedek.

Christ means “the Anointed One” because he would come to be anointed to be a prophet, a king, and a high priest. According to this prophecy, he must come as high priest. However, his priesthood was different from the priesthood of the Jews of his time. According to the regulations of the old covenant, the descendants of Aaron from the tribe of Levi was ordained as priests and served God. Also, their common practice in the worship of God was an animal sacrifice by shedding the blood of an animal. 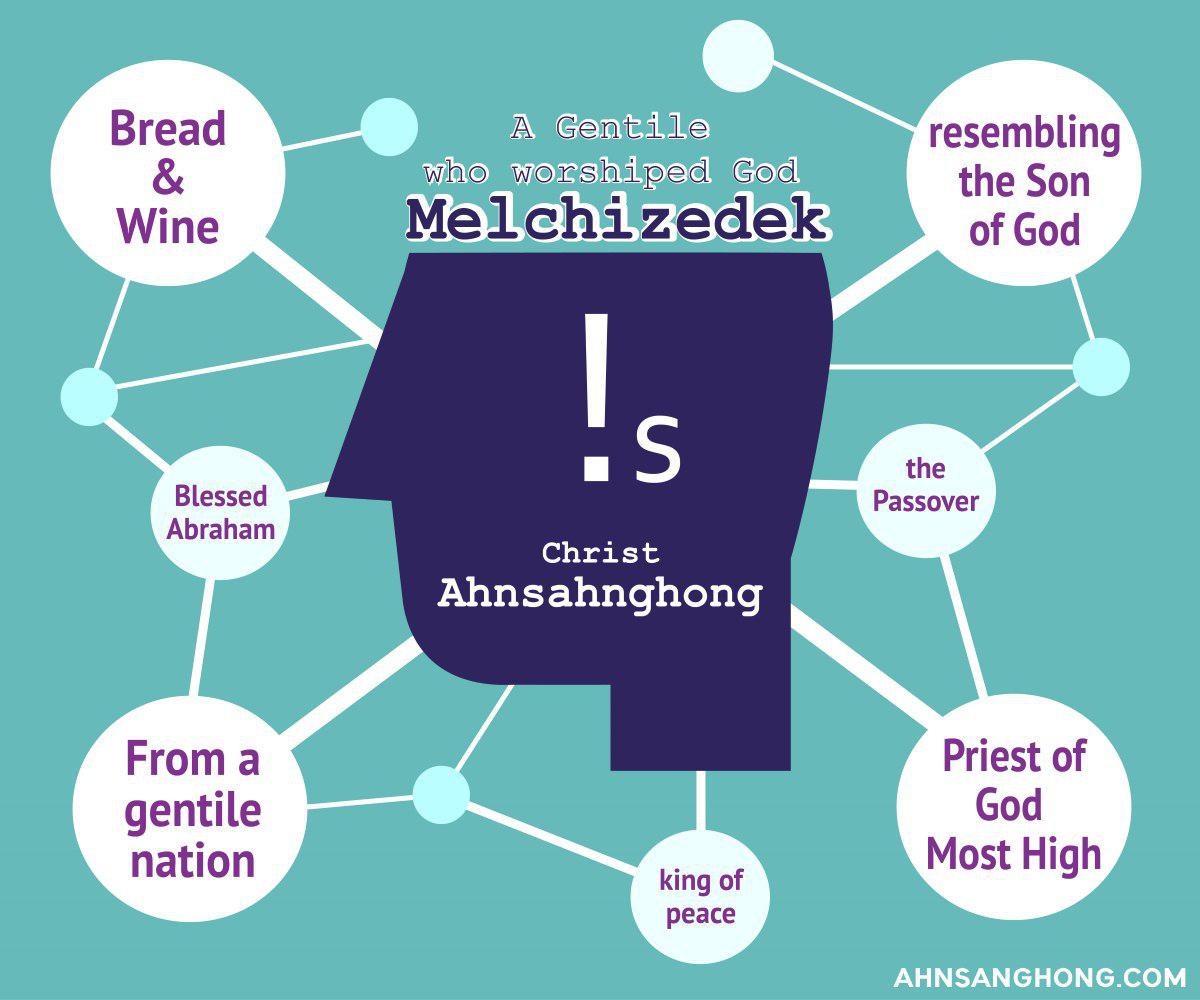 Melchizedek From A Gentile Nation–In the Book of John, Jesus said, “These are Scriptures that testify about me.” Truly all the recordings of the Bible lead us to Christ as “school master.” (Galatian 3:25) The story of Melchizedek—even though it looks so short and insignificant—contains deep secrets of Christ who would come as Melchizedek and bless us with bread and wine.

To teach us the true Melchizedek, Paul enumerates the characteristics of Melchizedek. First, he must be God because he received the tithe or “a tenth” from Abraham. The Bible says all the tithes belong to God. (Leviticus 27:30) Second; he must be the priest of God. Third, he must bless people with bread and wine. And Jesus completed this part of the prophecy of Melchizedek. However, there is one feature that Jesus could not satisfy as Melchizedek 2000 years ago, the King of Salem.

Melchizedek From A Gentile Nation

Melchizedek From A Gentile Nation–One essential feature of Melchizedek is that he was king of Salem, a Gentile nation. As I had explained before, at the time of Abraham, the Jews were in the body of Abraham. In that sense, the only Jew was Abraham himself. And all others including Melchizedek as well can be considered as Gentiles. It means the true Melchizedek must come from a Gentile nation. However, Jesus did not fulfill this part of the prophecies of Melchizedek. Jesus was a Jew in birth, not a Gentile.

Therefore, to complete the prophecy, Jesus must appear again from a Gentile nation. When he comes, he must appear with the symbol of Melchizedek, the bread and wine of the Passover.

Christ Ahnsahnghong completed this prophecy. First, he came from the land of Korea, a Gentile nation, which has nothing to do with Abraham’s line in the physical sense. It is a complete Gentile nation. Second, as a priest of God in the order of Melchizedek, he must bless us with bread and wine. The Passover got abolished at the Council of Nicaea in 325 AD, and nobody could keep it for over 1600 years. However, Christ Ahnsahnghong restored the Passover of the New Covenant. And he blessed us with bread and wine of the Passover for the forgiveness of sins and eternal life.

Then who must Christ Ahnsahnghong be? About the one who restored the Passover, the prophet Isaiah testifies as God himself. (Isaiah 25:6-9) Through the fulfillment of all the prophecies of the Bible, we can be sure that Ahnsahnghong is the true Christ or the Anointed One who came to us as high priest in the Order of Melchizedek. Therefore, to receive the blessings of salvation, we must come to Christ Ahnsahnghong and eat the bread and wine of the Passover.

21 thoughts on “Melchizedek, A Gentile Who Worshiped God”