John the Baptist, Prophet Elijah Who Was To Come

Elijah, Who Comes to Prepare the Way of God–Prophetically, there are many important figures in the Old Testament. And their lives in the past work as type to show us the Christ who would appear to complete the works of those figures spiritually. One of the figures is Elijah who would appear in the end time to lead us to the Savior. Therefore, the prophecies of the Old Testament say that we must find the one who comes as Prophet Elijah for salvation in the last day.

Prophecies of Prophet Elijah and His Works

Elijah, Who Comes to Prepare the Way of God–Now has come the time for all the prophecies of the bible to be made complete. Therefore, now we must know about this prophetical Elijah and meet him so that we can be saved. Since the Old Testament works a copy and shadow, let us first look at the Old Testament.

Malachi 4:5  “See, I will send the prophet Elijah to you before that great and dreadful day of the Lord comes. 6 He will turn the hearts of the parents to their children, and the hearts of the children to their parents; or else I will come and strike the land with total destruction.”

This is a prophecy of the appearance of spiritual Elijah in the last day just before the Day of Judgment or the day of destruction. The bible says that there would be a separation between God and his people in that day. However, Elijah would come and bring a reconciliation that God’s people may return to God. And also God would have pity on them. Let us take a look at another work of Elijah.

Malachi 3:1 “I will send my messenger, who will prepare the way before me. Then suddenly the Lord you are seeking will come to his temple; the messenger of the covenant, whom you desire, will come,” says the Lord Almighty.

In this prophecy God teaches us the work Elijah would do to bring the reconciliation. Elijah would come and prepare “the way before me (or God)” that God (or the Lord) would come to his people bringing the covenant of salvation. 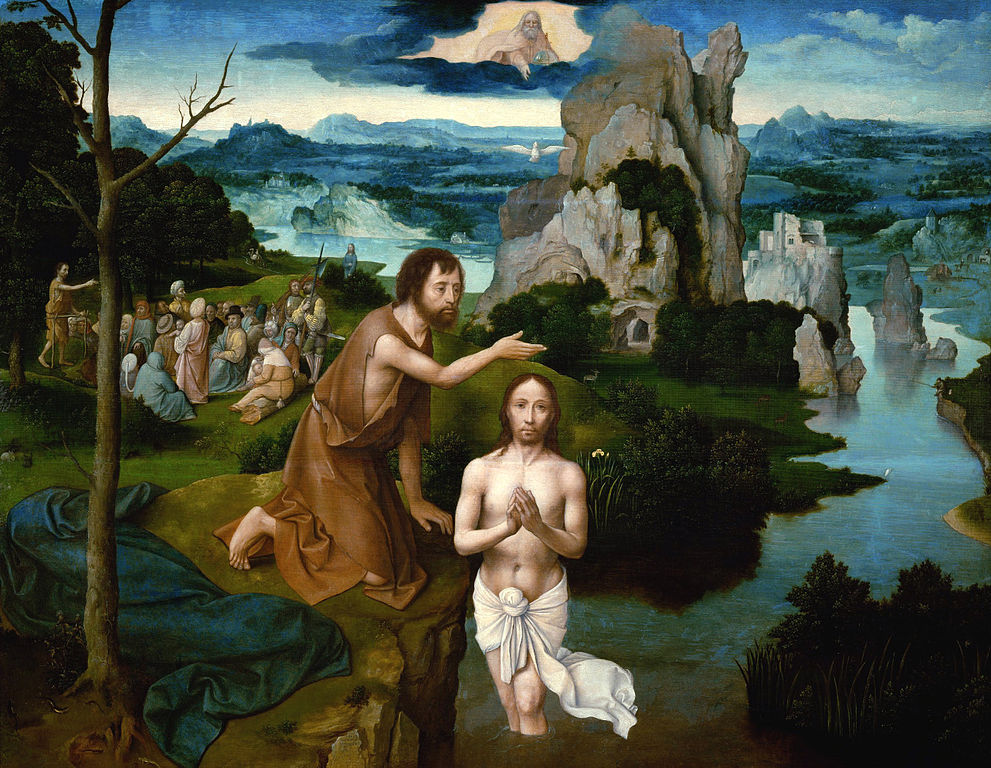 John the Baptist is preparing the way for the Lord Jesus through the baptism.

John the Baptist Who Appeared as Spiritual Elijah

Elijah Came to Turn the Heart of People to God

Prophet Elijah, Who Comes to Prepare the Way of God–Through these prophecies, we can see some signs through which we can recognize the spiritual Elijah. Elijah would come to prepare the way of God and God would appear to give us the covenant of salvation. Then we would be able to return to God to receive the covenant. Prophet Isaiah also prophesied about the work of Elijah.

Isaiah 40:3 A voice of one calling: “In the wilderness prepare the way for the Lord; make straight in the desert a highway for our God.

This is the same prophecy of Malachi Chapter 3. And it prophesied about Elijah who would come to prepare the way of the Lord. The Lord or God appears after Elijah comes to prepare the way for Him. Therefore, what we have to do to meet God is to know this spiritual Elijah. It is because Elijah comes first and then the Lord appears.

Mark 1:4 And so John the Baptist appeared in the wilderness, preaching a baptism of repentance for the forgiveness of sins. 5 The whole Judean countryside and all the people of Jerusalem went out to him. Confessing their sins, they were baptized by him in the Jordan River.

John the Baptist came as spiritual Elijah and preached the baptism of repentance. And those who got baptized with the mind of repentance could return to God by receiving the Savior God the Son Jesus. 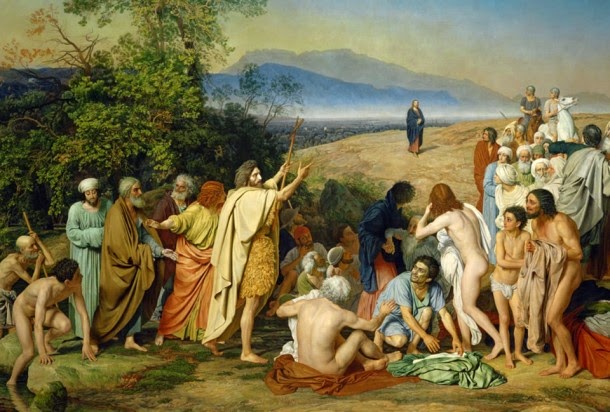 Behold, The Lamb of God. John the Baptist Preparing Way of Lord.

Elijah, Who Comes To Prepare the Way of God

Elijah, Who Comes to Prepare the Way of God–Also, finally when the time came for the Jesus to appear in this world, John the Baptist fulfilled the prophecies by preparing the way of God through the baptism of Jesus Christ. To prepare the way for the Lord, John the Baptist as spiritual Elijah did many things to reveal the Lord (Jesus Christ) to people. First, he baptized Jesus so that Christ (the Anointed One) would be anointed through the baptism so that Jesus would do his ministry as king, prophet, and high priest.

Matthew 3:13 Then Jesus came from Galilee to the Jordan to be baptized by John. 14 But John tried to deter him, saying, “I need to be baptized by you, and do you come to me?” 15 Jesus replied, “Let it be so now; it is proper for us to do this to fulfill all righteousness.” Then John consented.

Also, to fulfill the prophecies of “preparing the way for the Lord” so that the Lord may be revealed to his people, John the Baptist gave a lot of testimonies about Jesus.

John 1:26 “I baptize with water,” John replied, “but among you stands one you do not know. 27 He is the one who comes after me, the straps of whose sandals I am not worthy to untie.”

The Lord Who Came After Elijah

John 1:29 The next day John saw Jesus coming toward him and said, “Look, the Lamb of God, who takes away the sin of the world! 30 This is the one I meant when I said, ‘A man who comes after me has surpassed me because he was before me.’

As spiritual Elijah, John the Baptist revealed the identity of Jesus, the one who came after him. Jesus was non other than the Lord himself who would appear after Elijah prepared the way for Him. So the prophecies of Malachi and Isaiah were fulfilled by John the Baptist and Jesus.

Behold the Lamb of God. John the Baptist testifies about Christ.

Jesus’ Testimony About John the Baptist As Elijah

Prophet Elijah, Who Comes to Prepare the Way of God–We can confirm through the testimonies of Jesus that John the Baptist was the Elijah who would come to prepare the way for the Lord.

Matthew 11:10 This is the one about whom it is written: ‘I will send my messenger ahead of you, who will prepare your way before you.’

Matthew 17:11 Jesus replied, “To be sure, Elijah comes and will restore all things. 12 But I tell you, Elijah has already come, and they did not recognize him, but have done to him everything they wished. … 13 Then the disciples understood that he was talking to them about John the Baptist.

The Works of Elijah Fulfilled By John the Baptist

Elijah, Who Comes to Prepare the Way of God–Through all these teachings of the bible, we can see that the biggest mission given to Elijah according to the prophecies was to reveal the Savior who would come after him. Therefore, John the Baptist came as Elijah and fulfilled his mission obediently by revealing Jesus to people and testifying about Jesus in many instances.

Physical Appearances of John the Baptist

Not only with these fulfillments of prophecies, but also with the physical appearances can we know that John the Baptist was prophetical Elijah. The most outstanding physical attributes of Elijah in the Old Testament was in his garment of hair and leather belt.

2 Kings 1:7 The king asked them, “What kind of man was it who came to meet you and told you this?” 8 They replied, “He had a garment of hair and had a leather belt around his waist.” The king said, “That was Elijah the Tishbite.”

Even though the king did not realize who the prophet was at first. However, as soon as he came to know the physical appearance of the prophet, he could realize immediately who the prophet was. 2000 years ago, when John the Baptist came, he attired himself in the same way.

Mark 1:6 John wore clothing made of camel’s hair, with a leather belt around his waist, and he ate locusts and wild honey.

Elijah, Who Comes to Prepare the Way of God–Not only this, the place where John the Baptist did his ministry also works as sign, telling that he was the spiritual Elijah. John the Baptist worked on the eastside of Jordan, that is, a place in the East of Jerusalem. This was to fulfill the work of Elijah, who came from the East of Jerusalem on the other side of Jordan.

John 1:28 This all happened at Bethany on the other side (or East) of the Jordan, where John was baptizing.

Then why did John the Baptist start his ministry from “the other side of Jordan”? It happened to fulfill the works of Elijah in the past. Elijah was a prophet from Glead (1 Kings 17:1, Joshua 20:8) According to the bible, Elijah was a man from Gilead which is “on the other side of Jordan,” which means it was on the East of Jerusalem across the Jordan River. Jerusalem was the center of the nation of Israel. However, Elijah came from the East of Jerusalem, a Gentile land in the spiritual sense.

Therefore, to fulfill the prophecies of Elijah, John the Baptist started his mission from the East of Jordan on the other side of the river. 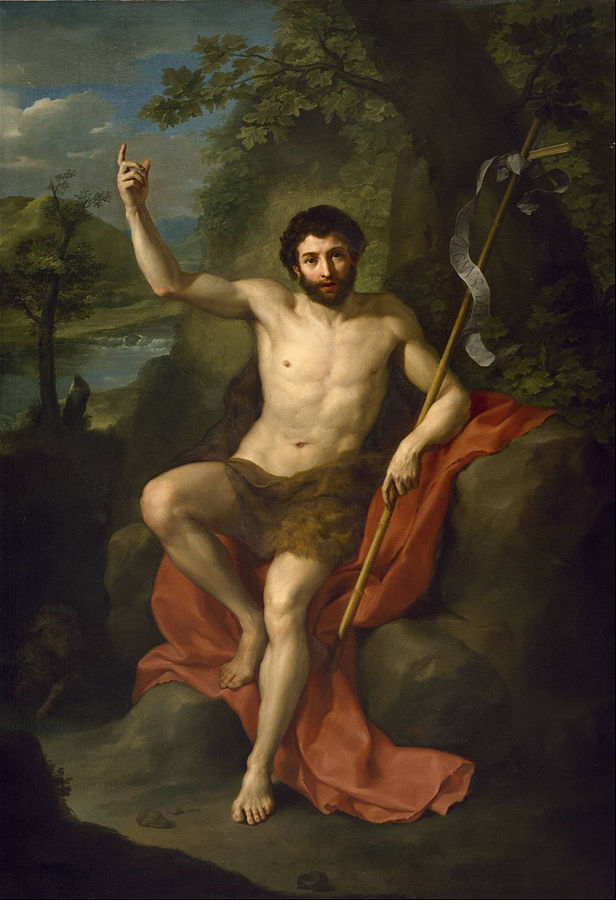 Was John the Baptist Elijah who was to come?

Elijah, Who Comes to Prepare the Way of God–For all these reasons, we can understand why Christ said that John the Baptist was Elijah who was to come. Truly, the prophecies of the bible are amazing. And every small stroke of pen is accomplished according to the will of God.

However, this prophecy and the fulfillment of the prophecy of Elijah by John the Baptist was not complete. (To know more about this click here.)  First, Elijah must appear in the last day just before the Day of Judgment. When John the Baptist appeared 2000 years ago, it was not the end time yet. Also, as we can see in the name Elijah, Eliijah, which is the composition of Eli (My God) and Jah (Jehovah), means God Jehovah. It means God Jehovah himself must appear as Elijah to bring reconciliation. However, 2000 years ago, Jesus, who was God Jehovah appearing as man in the flesh, was not Elijah. Rather, John was Elijah who came to prepare the way of Jesus, the Lord.

Therefore, we can say that the prophecies of Elijah was not complete 2000 years ago. Then how would this prophecies be made complete in the last day? Who would be the true spiritual Elijah? And whose way is he coming to prepare for? All these questions and answers are important for the salvation in the last days. In the next post, I would like to talk more about the true Elijah who would come in the last day to prepare the way for the Lord.