Therefore, people who live in the last days must know who the bride of Christ is. And they should receive her and the salvation of the water of life coming from her. Without knowing her, nobody can come or receive the water of life coming from the Spirit and the Bride. Now, let us know how she would appear. What is the connotation of the new Jerusalem “coming down out of heaven from God”?

God’s Dwelling Among His People

God the Mother New Jerusalem–To study about this subject, let us find out the biblical description about the appearance of the “heavenly Jerusalem” from the Book of Revelation.

Revelation 21:2 I saw the Holy City, the new Jerusalem, coming down out of heaven from God, prepared as a bride beautifully dressed for her husband. 3 And I heard a loud voice from the throne saying, “Look! God’s dwelling place is now among the people, and he will dwell with them. They will be his people, and God himself will be with them and be their God.

What Is the Dwelling of God?

God the Mother New Jerusalem–This is an important matter to understand. Without knowing the spiritual meaning behind it, one might come to a hasty conclusion that God would come down from heaven and establish his kingdom among his people. And God and His people live on this earth forever.

Tabernacle In the Time of Moses

Exodus 25:8 “Then have them make a sanctuary for me, and I will dwell among them. 9 Make this tabernacle and all its furnishings exactly like the pattern I will show you.

When God commanded Moses to build a sanctuary or a tabernacle, God appointed the sanctuary as His dwelling. Through this we can know the dwelling of God is the sanctuary of God.

Temple In the Time of Solomon

The sanctuary has many different names such as the tabernacle and later the temple of God in the time of Solomon. In this sense, the dwelling of God is the temple of God which He has chosen for his dwelling. Through Moses God commanded that the Israelites must bring the sacrifices to his dwelling or temple when they would inherit the land of Canaan.

Deuteronomy 12:11 Then to the place the Lord your God will choose as a dwelling for his Name—there you are to bring everything I command you: your burnt offerings and sacrifices, your tithes and special gifts, and all the choice possessions you have vowed to the Lord.

Later in the time of Solomon, God commanded Solomon to build his temple as the dwelling for the Name of God.

Dwelling of God, The Temple of God

Therefore, we can conclude the dwelling of God is the temple of God. What was the tabernacle or the temple for? When Moses built the tabernacle, finally God started to dwell among his people by putting His Spirit in the Most Holy Place of the tabernacle. (Exodus 40:34)

Exodus 25:22 There, above the cover between the two cherubim that are over the ark of the covenant law, I will meet with you and give you all my commands for the Israelites.

God sat enthroned between the cherubim in the Most Holy Place. And dwelling among His people, He gave His laws and commands to His people.

The Reality of the Dwelling of God

God the Mother New Jerusalem–So through all these words of God in the bible we can say the dwelling of God is the temple of God. By looking at another version of the bible, we can be sure about this.

Revelation 21:2 And I John saw the holy city, new Jerusalem, coming down from God out of heaven, prepared as a bride adorned for her husband. 3 And I heard a great voice out of heaven saying, Behold, the tabernacle of God is with men, and he will dwell with them, and they shall be his people, and God himself shall be with them, and be their God. (KJV)

Then does it mean that God would make his temple among his people in the last day on this earth? Definitely not. The temple of God in the Old Testament was a copy and shadow given to God’s people until the time of the appearance of the reality of the temple. To understand this matter let us take a look at the prophecy of Christ through the bible.

The Prophecy of the Appearance of King David

Spiritual David And The Temple of God

26 I will make a covenant of peace with them; it will be an everlasting covenant. I will establish them and increase their numbers, and I will put my sanctuary among them forever. 27 My dwelling place will be with them; I will be their God, and they will be my people. 28 Then the nations will know that I the Lord make Israel holy, when my sanctuary is among them forever.’”

God the Mother New Jerusalem–This is the prophecy of the appearance of a spiritual David as the king and shepherd of God’s people. As we have already seen in many of the prophecies of King David, the Spiritual David was fulfilled by Jesus Christ and later Christ Ahnsahnghong. What is interesting in this prophecy is when King David appears, finally the dwelling of God would be with the people of God. In other words, God would dwell among his people.

This is the same prophecy of Revelation 21:3. Then what is the meaning of the dwelling or the temple of God among his people? Let us think about the time of Jesus. When Jesus appeared as King David, did Jesus establish a temple of God literally? Actually, through his teachings, Jesus seemed to negate the physical temple of God.

Figurative Meaning of Temple Of God

John 4:21 “Woman,” Jesus replied, “believe me, a time is coming when you will worship the Father neither on this mountain nor in Jerusalem. 22 You Samaritans worship what you do not know; we worship what we do know, for salvation is from the Jews. 23 Yet a time is coming and has now come when the true worshipers will worship the Father in the Spirit and in truth, for they are the kind of worshipers the Father seeks. 24 God is spirit, and his worshipers must worship in the Spirit and in truth.”

God the Mother New Jerusalem–In those days, out of ignorance people built worship places on mountains to worship gods. However, Jews were worshiping God in the Jerusalem Temple obeying the command of God. Now, Jesus was teaching that it was not necessary for them to go to the temple of God in Jerusalem any more. The time came now when the people of God had to worship in Spirit and in truth. By saying this he was teaching them that the Jerusalem Temple is not the dwelling of God anymore.

It seems that this teaching of Jesus contradicts to the prophecy of the Book of Ezekiel. In the Book of Ezekiel, God said that He would establish His dwelling or temple among his people in the time of the appearance of King David. In fact, Jesus, who appeared as King David, was abolishing the temple. Why did this happen?

Christ The Reality of Temple

God the Mother New Jerusalem–The answer for this question is in the concept of a shadow and reality. The Jerusalem Temple was given as shadow until the time of the reality. Then what was the true temple of God?

John 2:19 esus answered them, “Destroy this temple, and I will raise it again in three days.” 20 They replied, “It has taken forty-six years to build this temple, and you are going to raise it in three days?” 21 But the temple he had spoken of was his body. 22 After he was raised from the dead, his disciples recalled what he had said. Then they believed the scripture and the words that Jesus had spoken.

In this teaching, Jesus was revealing that the reality of the temple was his body. Until the time of the appearance of the Christ God temporarily gave his people physical building Temple and put His Spirit in it. And it became the dwelling of God. When God came in the flesh in the name of Jesus, however, God put His Spirit in the body of Christ, not in the physical building anymore. Since then, the Christ himself became the dwelling of God. 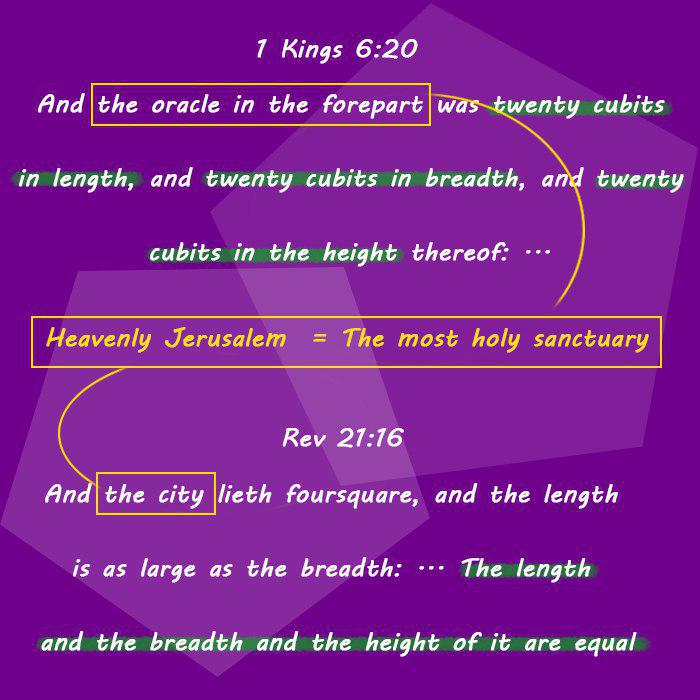 The heavenly Jerusalem coming down from heaven is our Mother who appears as the reality of the temple of God.

God the Mother New Jerusalem and The Temple of God

God the Mother New Jerusalem–Then let us go back to the original prophecy of Revelation. What is the meaning of the new Jerusalem coming down as dwelling of God in the last days? Does it mean God would establish a physical temple on this earth in the last days? Now we can be sure that this kind of conclusion is absurd and stupid.

Revelation 21:16 The city was laid out like a square, as long as it was wide. He measured the city with the rod and found it to be 12,000 stadia in length, and as wide and high as it is long.

According to this description of the new Jerusalem, it exactly looks like the Most Holy Place of the temple. Then what is the meaning of the appearance of the new Jerusalem as dwelling of God on this earth? Now we can be certain about it, right? It means God the Mother who is the reality of the Most Holy Place would appear as man in the flesh among her people. And She would put the Spirit of God in her body.

God the Mother New Jerusalem–To fulfill this prophecy, God the Mother appeared in the form of man, “taking the very nature of a servant, being made in human likeness”. She made her dwelling among his people by putting the Spirit of God in her body of temple.

Now God has come as the Spirit and the Bride to complete the parable of the heavenly wedding banquet. They are calling everyone to come to them for the water of life. Whoever listens comes to the Spirit and the bride, “They will be his people, and God himself will be with them and be their God”.

52 thoughts on “Heavenly Wedding Banquet: God The Mother Coming As Man In the Flesh”