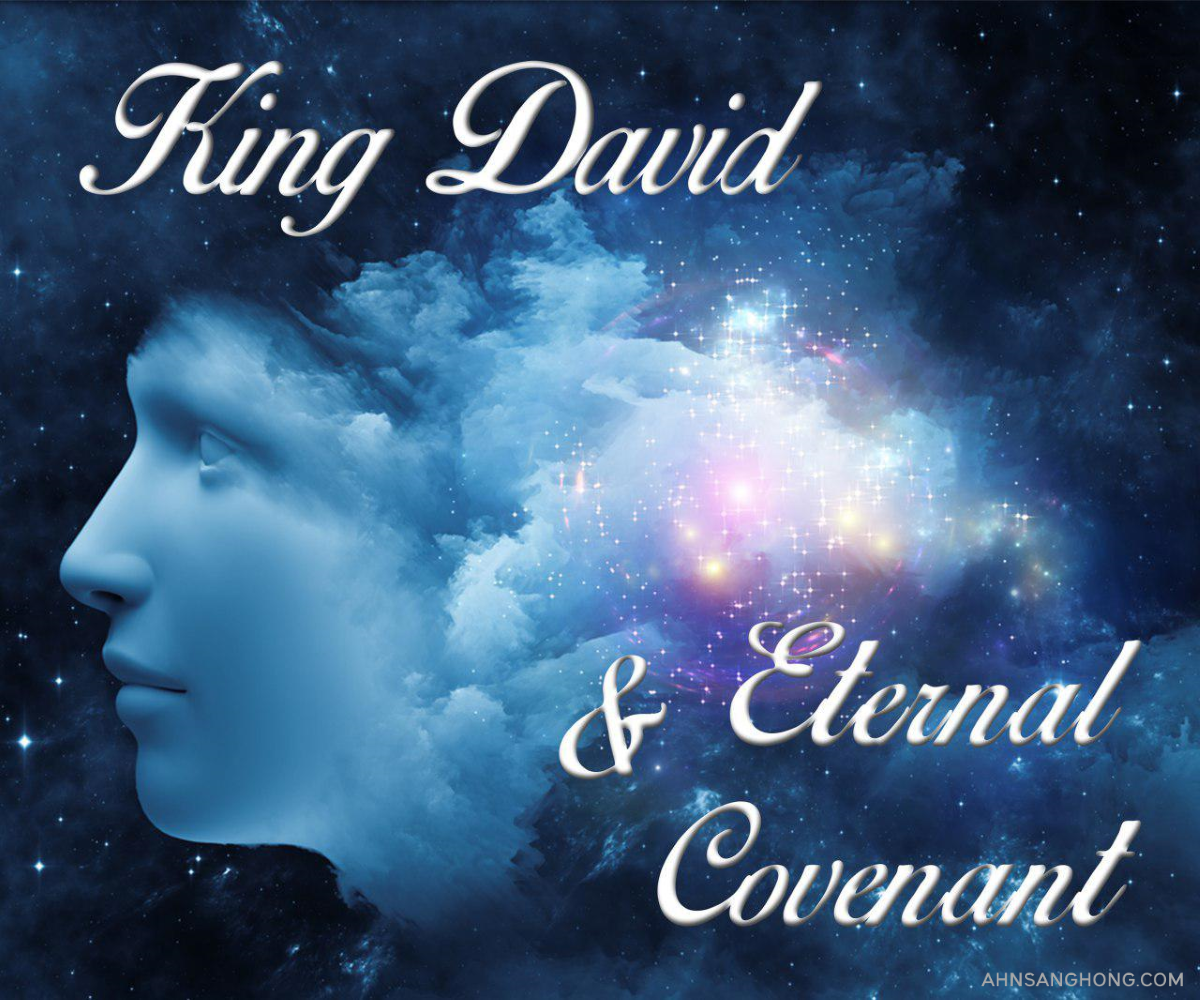 God’s Everlasting Covenant With King David–The Bible says that God loved David because David tried to understand and do the will of God. And David did his best to do what God was pleased with. That is why God complimented that David was the one who had the same mind and heart as God himself. Even though He set up Saul as the first king of Israel, later God gave the kingdom to David and his descendants.

1 Samuel 13:13-14  13 “You have done a foolish thing,” Samuel said. “You have not kept the command the Lord your God gave you; if you had, he would have established your kingdom over Israel for all time. 14 But now your kingdom will not endure; the Lord has sought out a man after his own heart and appointed him ruler of his people, because you have not kept the Lord’s command.”

Since Saul disobeyed the commands of God putting his thoughts over God’s, God chose another one as a king. Later God anointed David as a king because David was “the man after the heart of God himself.”

David’s Love and Obedience to God

God’s Everlasting Covenant With King David–The reason God chose David was that David had a love of God in his heart. Out of this reverent fear of God David always obeyed completely to the words of God. We can see easily how much David loved the words of God through the songs of David in the Book of Psalms.

Psalms 119:97-103   Oh, how I love your law! I meditate on it all day long. 98 Your commands are always with me and make me wiser than my enemies. 99 I have more insight than all my teachers, for I meditate on your statutes. 100 I have more understanding than the elders, for I obey your precepts. 101 I have kept my feet from every evil path so that I might obey your word. 102 I have not departed from your laws, for you yourself have taught me. 103 How sweet are your words to my taste, sweeter than honey to my mouth!

God’s Everlasting Covenant With King David–Even though the father of David Jesse had eight sons, the youngest boy David was chosen as king. God searched the heart of David and knew that David had a mind of obedience to the words of God. And because of David’s love for God and his words, God was pleased with David and gave his covenant to David. The promise God gave to David is called as “the eternal covenant” in the Bible. God’s everlasting covenant with King David is recorded in many places in the Bible as prophecies.

Isaiah 55:3  Give ear and come to me; listen, that you may live. I will make an everlasting covenant with you, my faithful love promised to David.

Ezekiel 37:24  “‘My servant David will be king over them, and they will all have one shepherd. They will follow my laws and be careful to keep my decrees. 25 They will live in the land I gave to my servant Jacob, the land where your ancestors lived. They and their children and their children’s children will live there forever, and David my servant will be their prince forever. 26 I will make a covenant of peace with them; it will be an everlasting covenant. I will establish them and increase their numbers, and I will put my sanctuary among them forever. 27 My dwelling place will be with them; I will be their God, and they will be my people.

The Blessings of the Everlasting Covenant

God’s Everlasting Covenant With King David–There are a couple of things we must understand about these prophecies. The first thing is the blessings of this everlasting covenant God made with David. Isaiah said that this covenant could give life to the soul. It means it can give us eternal life. And Prophet Ezekiel teaches that the relationship between God and his people would be established through this eternal covenant. In other words, God would accept those who keep the eternal covenant as his people.

Second, what we need to remember is the time when these prophecies were recorded. Both of the prophecies speaks about the spiritual or prophetical David. Isaiah wrote the prophecy about 300 years after King David’s death; and Ezekiel, about 450 years after. Therefore, the King David they are prophesying about is not physical, but spiritual. Then who is the spiritual David who would bring the everlasting covenant of God to give us eternal life? And also what is the everlasting covenant?

God’s Everlasting Covenant With King David–The bible teaches us that Jesus Christ was the spiritual King David who fulfilled the prophecies of the bible.

Luke 1:31   32 He will be great and will be called the Son of the Most High. The Lord God will give him (Jesus Christ) the throne of his father David, 33 and he will reign over Jacob’s descendants forever; his kingdom will never end.

The gospel writer Luke clearly records that Jesus was the one who received the throne of David as spiritual David. Also, we can confirm that through the story of Jesus entering into Jerusalem. This scene was a critical moment in the ministry of Jesus. Through this entry, he fulfilled many prophecies of the Bible. Another name for Jerusalem was the City of David because David captured Jerusalem. In this sense, Jesus’ entrance into the city symbolized his enthronement in the City of David as spiritual King David.

Matthew 21:5-9   This took place to fulfill what was spoken through the prophet: 5 “Say to Daughter Zion, ‘See, your king comes to you, gentle and riding on a donkey, and on a colt, the foal of a donkey.’” … 9 The crowds that went ahead of him and those that followed shouted, Hosanna to the Son of David!” “Blessed is he who comes in the name of the Lord!” “Hosanna in the highest heaven!”

The king of Zion is David. And this prophecy says that David would come on a donkey. Through the fulfillment of this prophecy of Zechariah, we can see that Jesus was the spiritual King David.

The Sign Of David, God’s Everlasting Covenant with King David

Hebrews 13:20  Now may the God of peace, who through the blood of the eternal covenant brought back from the dead our Lord Jesus, that great Shepherd of the sheep (NIV)

Hebrews 13:20  God is the one who raised from death our Lord Jesus, the Great Shepherd of his sheep. He raised him because Jesus sacrificed his blood to begin the new agreement that never ends (or eternal covenant). (ERV)

According to this verse, we can see that Jesus made the eternal covenant by sacrificing his blood. Then what was the covenant Jesus established with his blood?

Luke 22:19-20   And he took bread, gave thanks and broke it, and gave it to them, saying, “This is my body given for you; do this in remembrance of me.” 20 In the same way, after the supper he took the cup, saying, “This cup is the new covenant in my blood, which is poured out for you.

Blessings of the New Covenant of the Passover

The Blessing of Eternal Life

John 6:53  Jesus said to them, “Very truly I tell you, unless you eat the flesh of the Son of Man and drink his blood, you have no life in you. 54 Whoever eats my flesh and drinks my blood has eternal life, and I will raise them up at the last day.

The Blessing of Becoming God’s People

God’s Everlasting Covenant With King David–Also, in the Book of Ezekiel God said, “I will be their God and they will be my people.” Those who keep God’s everlasting covenant of King David can be accepted as God’s people. Now let us take a look at a prophecy of Jeremiah.

Jeremiah 31:31 “The days are coming,” declares the Lord, “when I will make a new covenant with the people of Israel and with the people of Judah…..“I will put my law in their minds and write it on their hearts. I will be their God, and they will be my people.

The Historical Background of the Abolishment of the Passover

This discrepancy between the churches continued until 325 AD. On this year a Roman emperor Constantine convened a first whole scale religious council encompassing all the churches. And with his own authority, finally, he abolished the Passover. Since then nobody could keep the Passover and could receive blessings of eternal life.

God’s Everlasting Covenant With King David–However, the Bible says that the Christ would come again to give us salvation in the last days.

Hebrews 9:28  so Christ was sacrificed once to take away the sins of many; and he will appear a second time, not to bear sin, but to bring salvation to those who are waiting for him.

Also, the bible says that God would appear as David in the last days to give salvation.

Hosea 3:5  Afterward the Israelites will return and seek the Lord their God and David their king. They will come trembling to the Lord and to his blessings in the last days.

The two prophecies contain the same meaning: in the last days, God’s people must seek the Second Coming Christ who would appear as David to receive the blessing of eternal life. If then, how can we recognize the David who would come in the last days? Without knowing him, we cannot receive salvation. 2000 years ago as spiritual David Jesus brought the new covenant Passover, God’s everlasting covenant with King David as the sign of David. Therefore, the spiritual David who appears in the last days must bring the Passover so that we may know the true David.

In these last days, Christ Ahnsahnghong brought the new covenant of the Passover. He rebuilt Zion the city of God’s festivals and restored all the festivals of God including the Passover the new covenant, God’s everlasting covenant with King David. Through this, we must know who Ahnsahnhong is. He is the Christ who was to come as David to give us salvation.

King David and the Everlasting Covenant

41 thoughts on “King David and the Eternal Covenant”