God the Mother In The Bible

God the Mother In The Bible–Even though the Messiah is testified in the bible, it is not always easy to recognize the God in the bible. When Christ Jesus came as Messiah 2000 years ago, people could not accept him. They rejected him for many different reasons. However, the main reason for this disapproval came from the prejudice that they had about Christ or Messiah.

They judged Jesus through their own opinions and perspectives. And the conclusion they made was that he (Jesus) was just a man who claimed to be God. Apparently, it seemed that Jesus did not have any power, authority, education, knowledge, etc. to be called the Christ or God testified in the bible. If only they listened to the words of God in the bible and judged him, they might have a chance to know the true identity of “the man Christ Jesus”.

It is the same today. The Bible teaches us that the female image of God or God the Mother exists in heaven and she would appear as human to us in the last day. Even the bible says that she is the one who would give salvation and eternal life in the last day. Now is the time for us to get rid of our own prejudice about God and bible. Let us look at the words of God with a renewed spirit. Then we would be able to see God the Mother in the bible.

Now, let us take a look at the bible to find the evidences of God the Mother hidden as parables and prophecies. And let us accept God the Mother and receive the eternal life and salvation. 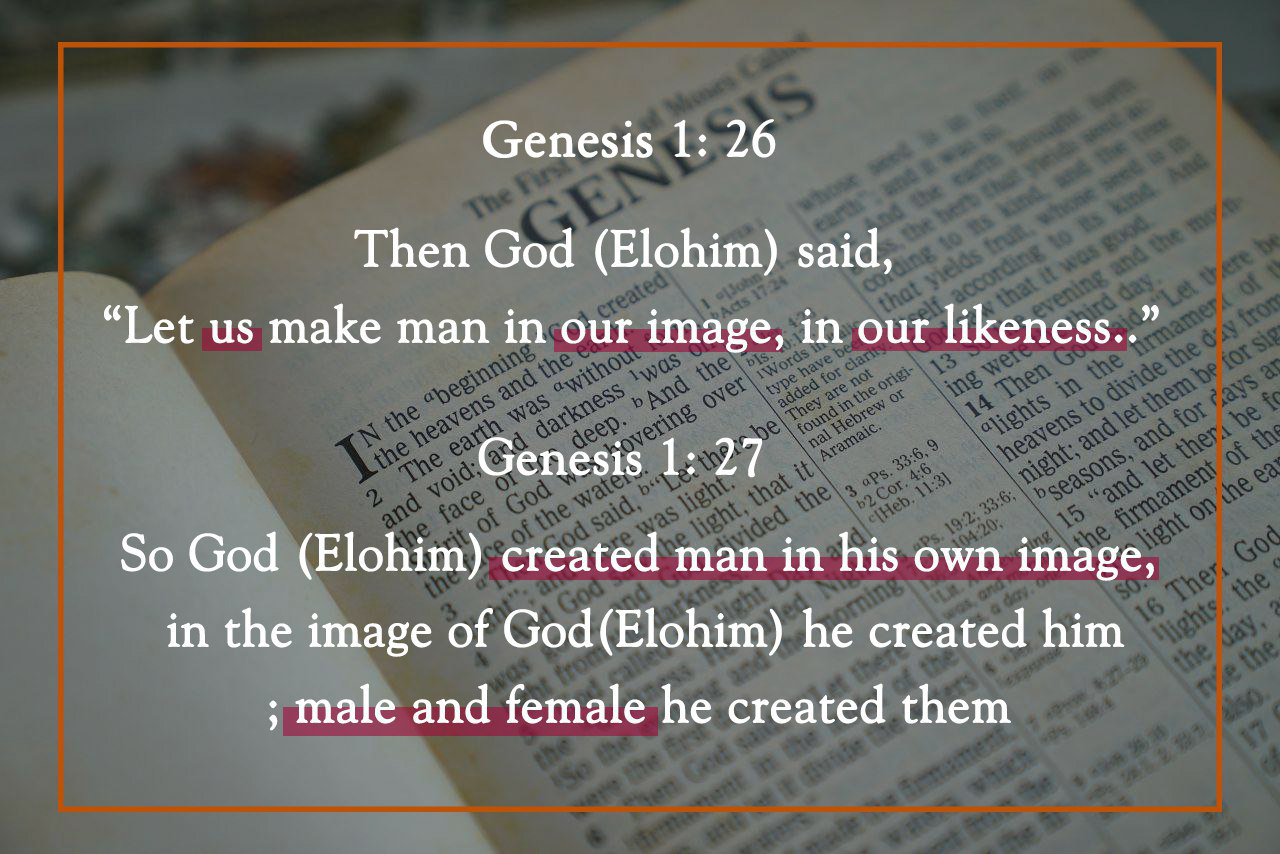 Then God said, “Let US make man in OUR image”

The climax of Genesis 1 and the heart of its mystery comes in the description of the creation of adam, the Hebrew term meaning “human being” or “humanity.”  God had said, “Let there be light.”  But now, God does not say, “Let there be man.”  Instead he says, “Let us make man (adam) in our image, after our likeness” (Genesis 1:26).  Every other act of creation had been a singular act – a word spoken and carried out.  Now it would appear that God is surrounded by others like himself. This passage has long been a puzzle for interpreters of the Bible. The ancient Jewish philosopher Philo admitted that only God knows the reason for it, but argued that it reflected the mixed character of humanity, combining both good and evil.  Early Christian interpreters thought of it as a reference to the presence of Christ at creation.

From Mysteries of the Bible

God the Mother In The Bible–People used to believe that God is One and He is Father. Then why does God who is one use a plural form to refer to himself? Instead of “Let me make man in my image,” God uses “us” and “our”. What could be the reason? This has long been a mystery to those who study the bible.

To solve this mystery, first we have to know the word “Elohim” which is used 2500 times to refer to God in the original Hebrew Language Scriptures. “Elohim” is a plural form of “El” or “Eloah” (singular form of God). So intrinsically God is plural and we have to call the Creator as Gods, not God. Therefore, the Creator who created man was Gods or Elohim.

God Elohim: God the Father and God the Mother

God the Mother In The Bible–Then let us look at the Creator who created Adam and Eve, the first man and woman.

The God who created man is God Elohim. In other words, the Creator is the plural form of God or Gods. Therefore, if we correctly translate the original Hebrew into English, all the “God” actually should be translated into “Gods”. This plural form of God, Elohim is used 2500 times to represent God. Therefore, it is natural for God to use “us” and “our,” rather than “me” or “my”.

Then why is God using the plural form? How many images are in God the Creator? And what kind of images are in them? Why did one God say, “Let us make man in our image”? People were wondering about these enigmatic word Elohim and “us and our”, but they could not find out the answer for this question.

Elohim and God the Mother

Romans 1:20 For since the creation of the world God’s invisible qualities—his eternal power and divine nature—have been clearly seen, being understood from what has been made, so that people are without excuse.

The bible says that the invisible qualities of God can be understood through the created things on this earth. Then what did God create to show the invisible quality of God Elohim? It is “man”. Elohim created man and gave their image: “Then God (Elohim) said, “Let us make mankind in our image, in our likeness.” Since “man” or “mankind” is created according to the invisible image of Elohim, we can understand the image of God Elohim through the image of man. Then how many images were given to man as copy and shadow of Elohim? Two images, male and female.

Man who took after the image of Elohim has two different images: male and female. For instance, if a copied image has a picture of a man and a woman in a copy machine, what would be the original image? The answer would be obvious: man and woman. Spiritually, it is the same. Since man as the copied image of God has two images, God the original must have two images too: male and female. We call the male image of God as Father. Then what should we call the female image of God? God the Mother. 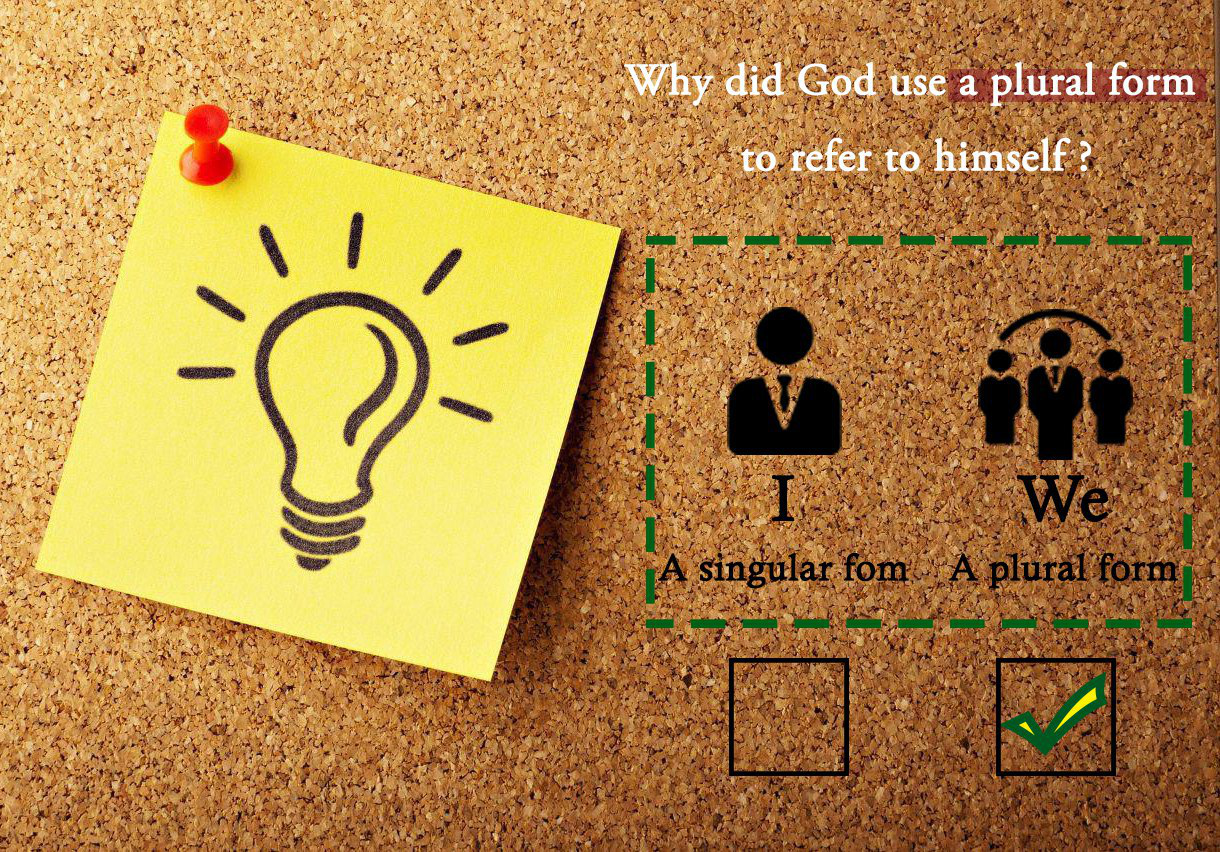 How many images does God have?

God the Mother In The Bible–Christ is the biggest mystery in the bible. (Colossians 1:27, 2:2) If not, everybody should have accepted Jesus 2000 years ago. Christ is a mystery even now. If not, all the people of the earth should accept Christ Ahnsahnghong and Heavenly Mother New Jerusalem.

However, Jesus said, “Seek and you will find.” Just as he said, if we seek earnestly for God, God would reveal his invisible qualities to us so that we can know the true God Elohim. The time for the appearing of Christ which God would bring about has come now. God Elohim has appeared to us as “the Spirit and the Bride.” Now let us seek God so that we may find Them under the grace of Father and Mother.

54 thoughts on “God the Mother in the Bible: Creation of Man”