The Prophecies of Spiritual David

The Prophecy of Hosea: David’s Throne and Christ

Hosea 3:4  For the Israelites will live many days without king or prince, without sacrifice or sacred stones, without ephod or household gods. 5 Afterward the Israelites will return and seek the Lord their God and David their king. They will come trembling to the Lord and to his blessings in the last days.

According to this prophecy of Hosea, God’s people who were living without a king would have to seek “David their king” in the last days. And then they can meet God and to receive the blessing of salvation. Then who is the David? We cannot say that the David in this prophecy represents King David, the second king of the nation of Israel around B.C. 1000. Hosea was a prophet who lived about 250 years after King David. When he wrote this prophecy, King David had passed away long ago. Then who is the David that we must seek for salvation. –David’s throne and Christ Ahnsahnghong–

The Prophecy of Isaiah

Prophet Isaiah gives the same prophecy of David so that we can know who the spiritual David is.

Isaiah 9:6  For to us a child is born, to us a son is given, and the government will be on his shoulders. And he will be called Wonderful Counselor, Mighty God, Everlasting Father, Prince of Peace.  7 Of the greatness of his government and peace there will be no end. He will reign on David’s throne and over his kingdom….

Prophet Isaiah gives a prophecy about a male child who would be born in the future. But the title given to the boy reveals the true identity of the one who was to come as “son”. Let us look at the title, “Mighty God” and “Everlasting Father”. He is none other than God himself who would appear as a man in the flesh or as Christ, the Anointed One who would appear as Savior. When God appears as a man in the flesh, he will sit on the throne of David. It means that David’s throne is working as a sign of Christ so that we would recognize the true Christ. –David’s throne and Christ Ahnsahnghong–

The Throne of David And Christ Ahnsahnghong

Then who fulfilled the prophecy of David and appeared to give salvation? Most of the people who have some knowledge of the bible already know that Jesus was the spiritual David, the King of the Jews or God’s people. The Book of Luke clearly says that Jesus was the one who came as David and fulfilled the throne of David: “ You will conceive and give birth to a son, and you are to call him Jesus. He will be great and will be called the Son of the Most High. The Lord God will give him the throne of his father, David…” (Luke 1:31)

King’s Throne In The Ancient Kingdom Of Israel

In the kingdom of ancient Israel, each king could be distinguished from others by two different characteristics: the age he became the king and the length of his reign. These two components composed the throne of a king. In this respect, we can understand David’s throne by looking at these two features in David’s reign and compared the life and work of David with those of Jesus to figure out how Jesus fulfilled the throne of David. First, let us understand the throne of King David.

2 Samuel 5:3  When all the elders of Israel had come to King David at Hebron, the king made a covenant with them at Hebron before the Lord, and they anointed David king over Israel. 4 David was thirty years old when he became king, and he reigned forty years.

According to the history of Israel in the Bible, they anointed David as king at the age of 30. And he ruled over the nation of Israel for 40 years. Through this we can know the throne of David. This life of physical David would work as signs to show the true Christ who would appear as spiritual David in the future. When Christ appears as King David, he must receive anointment at the age of 30. Also he must rule over God’s people for 40 years. –David’s throne and Christ Ahnsahnghong–

The Fulfillment Of David’s Throne And Christ Jesus

First Sign of David’s Throne and Christ Jesus: The Age Of His Ministry

Then how did Jesus Christ who received David’s throne fulfilled the prophecy? Now let us find out the fulfillment of the life and work of Jesus. First, when did Jesus become the king of Israel through anointment? As we can see in many places in the Old Testament, anointing means pouring holy oil on the head of the one who would become a king, prophet, or high priest. However, in the New Testament, anointing means “receiving the Holy Spirit”: “The Spirit of the Lord is one me, because he has anointed me.” (Luke 4:18)

Then when did Jesus receive the Holy Spirit? According to the Bible, he received the Holy Spirit or the Spirit of God when he received a baptism by John the Baptist. At the time he received the baptism, spiritually he got anointed as spiritual David, the king of God’s people. Then at what age should he receive baptism as King David? To fulfill the throne of David, he must be baptized at the age of 30, right? Let us confirm through the Bible. –David’s throne and Christ Ahnsahnghong–

Luke 3:21-22 When all the people were being baptized, Jesus was baptized too. And as he was praying, heaven was opened 22 and the Holy Spirit descended on him in bodily form like a dove. And a voice came from heaven: “You are my Son, whom I love; with you I am well pleased.” 23 Now Jesus himself was about thirty years old when he began his ministry.

Second Sign of David’s Throne and Christ Jesus: The Length of His Ministry

The first sign of David came true by the baptism of Jesus at the age of 30 as spiritual David. Then if he is to be a true David, how long should he reign or perform his ministry as spiritual David? It should be 40 years, right? But do you know how many years Jesus preached the gospel by giving the law of the new covenant to his people? In the parable of a vineyard, he explains his ministry of 3years, and after the 3-year ministry, he ascended back to heaven. (Luke 13:6)

If he is to be the spiritual David, he must reign over his people for 40 years like King David. He must teach them, preaching the gospel of the kingdom of heaven to his people. However, according to the parable of the vineyard, he only did his ministry for three years. After his suffering and resurrection, he ascended back to heaven. How should this be explained? Then can we say that Jesus was not the Christ who would come as David? Then is the bible wrong and not true? The words of God in the Bible cannot have any mistake or error. Then how can we explain the throne of David? –David’s throne and Christ Ahnsahnghong– 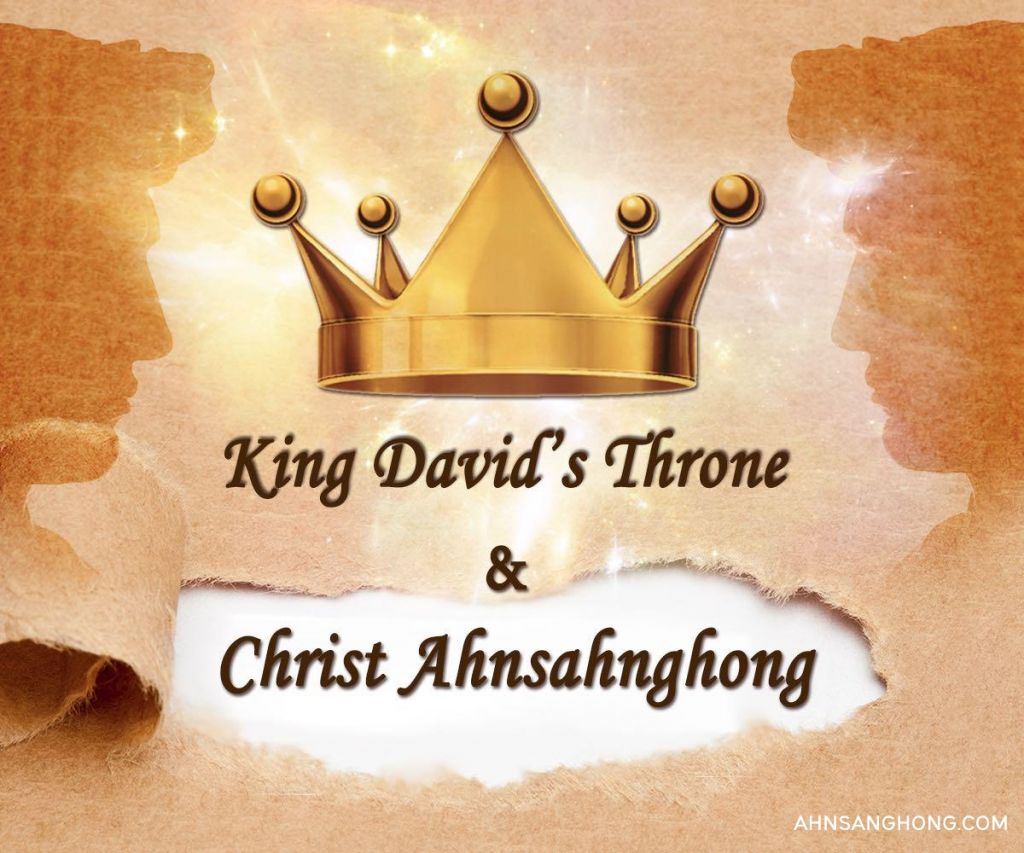 The Completion Of David’s Throne and Christ Ahnsahnghong

Since the prophecy of the throne of David was not completed by the first coming Christ, the Bible prophesies that Christ would appear for the second time.

Hebrews 9:28   so Christ was sacrificed once to take away the sins of many; and he will appear a second time, not to bear sin, but to bring salvation to those who are waiting for him.

Then let us understand the signs of Christ through a diagram.

The Signs Of David’s Throne And Christ Ahnsahnghong

Through this diagram, we can clearly see the two signs of David who would appear in the last days. First, he should receive a baptism at the age of 30 for the anointment as King David. And second, he must preach the gospel for the remaining 37 years. More than anything else, there is a sure sign of David that he must bring. That is the everlasting covenant or the new covenant of the Passover for the blessing of salvation. (Isa 55:3, Heb 13:20)

Then who fulfilled all the prophecies of the Bible? And who appeared to us as spiritual David, whom we must seek on this last day? It is Christ Ahnsahnghong. To fulfill David’s throne, he received a baptism in 1948 at the age of 30. And he performed his ministry by preaching the gospel until 1985. And in that year he ascended back to heaven after completing the remaining 37-year of David’s throne.

Christ Ahnsahnghong’s Testimony About Himself as David

To confirm his identity as spiritual David, in an interview with a religious magazine called “Weekly Religion” he explained about the throne of David and the second coming Christ.

The Church of God believes that the Second Coming Christ is to appear in this age and that he is to appear in the flesh with eyes, nose, mouth and ears. (…) The Second Coming Jesus has to come to the earth in secret and pass away after preaching the gospel for 37 years. The reason he has to preach for 37 years is because David reigned on the throne for 40 years, but Jesus was crucified after preaching for only three years, so the Second Coming Jesus has to preach for 37 years so that he can complete the 40-year reign,” says the Church of God. (March 18, 1981/Weekly Religion)

He has done this interview in 1981, four years before his ascension in 1985. After his ascension, his disciples finally realized that he was the spiritual David, the Second Coming Christ because of the fulfillment of David’s throne. Christ Ahnsahnghong’s life and work were the completion of the prophecies of the Bible including the throne of David. His baptism in 1948 at the age of 30 and his ascension in 1985, which was the very year when he completed the remaining 37-year of David’s throne through his life and work. –David’s throne and Christ Ahnsahnghong-

The last but not the least, he brought the new covenant of the Passover, the sign of the true David to us so that we can recognize who he is.

Through the prophecies and fulfillment, we can be sure that Christ Ahnsahnghong is the true Christ who was to appear to us as King David in the last day. In the Book of Hosea, the prophet taught that God’s people in the last days must seek David. Then they would come to know God and receive the salvation. To receive the salvation, now we must seek Christ Ahnsahnghong. And he taught the true source of salvation, the true source of the living water in our time, that is, our Mother Heavenly Jerusalem. I hope that everyone who reads this post come to Christ Ahnsahnghong. Then you will be able to receive the water of life from Heavenly Mother New Jerusalem.