Christ’s Coming From the East–Today, we are going to see another prophecy of Jesus’ coming for the second time. Through the prophecies of “clouds” and “fig tree” we come to understand that he must appear as man in the flesh after World War 2. Today, let us find out the prophecy of the place he was to appear according to the prophecies.

According to Matthew 24, his appearance is prophesied as “lightning coming from the east.” Prophesying about the appearance of many false christs, Jesus Christ revealed about his own coming like this.

Matthew 24: 26 “So if anyone tells you, ‘There he is, out in the wilderness,’ do not go out; or, ‘Here he is, in the inner rooms,’ do not believe it. 27 For as lightning that comes from the east is visible even in the west, so will be the coming of the Son of Man.

Here he foretold his second coming to the lightning coming from the east. Then what is the meaning of this prophecy? As we have already seen in other prophecies such as fig tree and clouds, lightning does not mean the literal lightning either, but a parable.

Lightning Coming From the East

Christ’s Coming From the East–Then what is the meaning of lightning? Let us look up the word “lightning” in a dictionary to find out the meaning.

The occurrence of a natural electrical discharge of very short duration and high voltage between a cloud and the ground or within a cloud, accompanied by a bright flash and typically also thunder.
(Oxford English Dictionary)

According to this definition we can see some characteristics of lightning: brilliance, speed, short duration, cloud. The most important feature is in its brilliance or brightness. Lightning is a very bright light. Therefore, to know the lightning, we have to know the parabolic meaning of light in the bible.

Light, the Words of God

Christ’s Coming From the East–According to the bible, light means the words of God. So the lightning means the bright and brilliant words of God which will lead us to salvation. Then who can bring the words of God in the last days? According to another prophecy in Revelation, the bible prophesies that it is only the Root of David (the Second Coming Christ) who can open the bible “sealed up with seven seals” and reveal the truth hidden in the bible. (Revelation 5:1, 22:16) 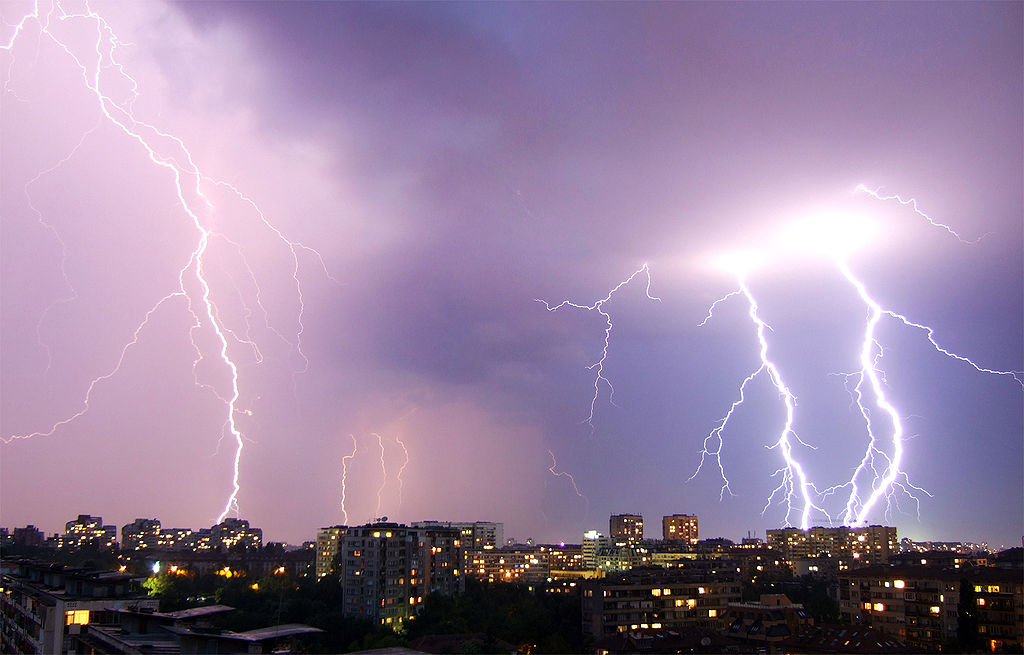 Coming From the East

We can confirm this with many other prophecies of the bible. In many places, God foretold that the Christ would appear in the east in the last days.

The Seal of God Coming From the East

First, let us look at a prophecy from Revelation. Revelation reveals that the Christ will appear in the east in the last days.

The Signs of the Appearance of the Angel

Revelation 6:12 The sun turned black like sackcloth made of goat hair, the whole moon turned blood red, 13 and the stars in the sky fell to earth, as figs drop from a fig tree when shaken by a strong wind.

We can see the signs in the sun, moon, and stars. After these signs, an angel with the seal of God appears and gathers God’s people by putting the seal on their foreheads before the coming of a great disaster (four winds) which will destroy “the land or the sea or the trees.” It means this is the last disaster which has power to harm everything except for those who received the seal of God.

Jesus, the Angel with the Seal of God

Christ’s Coming From the East–Then who is this angel coming from heaven with the seal of God? In the Book of Matthew, Jesus already gave us the answer for this question.

Matthew 24:29 “Immediately after the distress of those days “‘the sun will be darkened, and the moon will not give its light; the stars will fall from the sky, and the heavenly bodies will be shaken.’ 30 “Then will appear the sign of the Son of Man in heaven. And then all the peoples of the earth will mourn when they see the Son of Man coming on the clouds of heaven, with power and great glory. 31 And he will send his angels with a loud trumpet call, and they will gather his elect from the four winds, from one end of the heavens to the other.

In this teaching of Jesus, we can see the same signs in “the sun, moon and the stars” as we have seen in Revelation. After these signs, the Revelation said that an angel would come with the seal of God to give God’s people protection from the four winds (the last tribulation). And in this prophecy, Jesus teaches that the Son of Man (the Second Coming Christ) will come and gather “the elect” (God’s people) to protect them from the four winds (the last disaster).

Through this prophecy we can see that the angel with the seal of God in Revelation is actually the Second Coming Christ himself. But according to the prophecy, where is the angel coming from? The angel appears from the EAST, which means the second coming Christ will come from the east.

The Prophecies in the Book of Isaiah

An Eagle from the East

Christ’s Coming From the East–God also foretold the coming of the Savior from the east in the last days through the prophets of the Old Testament. Isaiah wrote about the appearance of Christ like this:

Isaiah 46:11 From the east I summon a bird of prey; from a far-off land, a man to fulfill my purpose. What I have said, that I will bring about; what I have planned, that I will do.

In this book of Isaiah, God foretold that he would call a man from the east to accomplish his will. Many knows that this prophecy was fulfilled by King Cyrus, the King of Persia. Just like other prophecies of the bible, however, this fulfillment by Cyrus was just a copy and shadow given as example for the reality which would be accomplished by Christ. We can easily confirm this by understand the will of God for this man from the east. What mission was entrusted to him?

Isaiah 46:13 I am bringing my righteousness near, it is not far away; and my salvation will not be delayed. I will grant salvation to Zion, my splendor to Israel.

Christ’s Coming From the East

Christ’s Coming From the East–The reason for the calling of the man from the east is for the glory of God, that is, the salvation for God’s people. The only one who can bring salvation to the people of God is God himself. But in this prophecy God teaches he will summon a man, which means God himself will appear as man in the flesh to bring salvation to his people. Therefore, this is the prophecy of the appearance of Christ as Savior.

The Living Water From the East

Christ’s Coming From the East–Let us take a look at another prophecy of Christ’ coming from the east in the Book of Isaiah.

Isaiah 41:2 “Who has stirred up one from the east, calling him in righteousness to his service? He hands nations over to him and subdues kings before him. He turns them to dust with his sword, to windblown chaff with his bow.

This is also a prophecy of calling a man from the east. Then who is this man who God calls to do the will of God? To understand this man, first let us look at the mission God entrusted to him.

Isaiah 41:17 “The poor and needy search for water, but there is none; their tongues are parched with thirst. But I the Lord will answer them; I, the God of Israel, will not forsake them. 18 I will make rivers flow on barren heights, and springs within the valleys. I will turn the desert into pools of water, and the parched ground into springs.

The Source of the Living Water

What happens when the man of God appears? The parched and dried lands are quenched with the spring of water or living water. Then who can bring the living water that gives life in the barren land? It is only the work of God. Since a man was called to do the work of God, we can call him Christ, who is God the Savior coming as man in the flesh. However, according to this prophecy, where is the Christ coming from bringing the living water? He is coming from the east. As we have already seen, above, this prophecy does not match with the appearance of the first coming Christ because he came in the land of Israel where Prophet Isaiah wrote this prophecy. Jesus Christ did not come from the east. Therefore, we can conclude that this is also a prophecy of the Second Coming Christ.

Jesus’ Coming From the East

Then where is this land of the prophecies of the bible? We have to know this place prophesied in the bible because Christ was to appear for the second time in this land, a far-off land in the east. If we look at the map of the world, we can see many different countries located on the east side of the Patmos Island and the land of Israel.

To fulfill the prophecies of the Bible Christ Ahsahnghong appeared in the land of Korea, a far-off land in the east. Korea is truly a far-off land in the east seen from the Patmos Island and Israel. It is the land of the rising of the sun. Even though there are many eastern lands and countries in the east of Israel, why then is it Korea where the Second Coming Christ appeared? It is because of the other prophecies Christ Ahnsahnghong fulfilled.

Christ Ahsanhghong, a Man from the East

Christ’s Coming From the East–Christ Ahnsahnghong came in the land of Korea to fulfill the prophecy of the man coming from the east. Also he appeared as man in the flesh to accomplish the prophecy of coming on the clouds. And he started his ministry in 1948 to fulfill the parable of the fig tree. For these and many other reasons we can clearly see who the man Ahnsahnghong is. Even though he came as man, in reality he is God himself who  has come to fulfill all the prophecies of the bible.

In the next article I will show that Christ Ahnsahnghong is the true second coming Christ who came to fulfill all the prophecies of the bible.

(Back to the Main Article)

38 thoughts on “Christ’s Coming from the East”