[The Knowledge of God]

The true faith coming out of knowledge

Christ Ahnsahnghong Who Fulfilled the Prophecy of Fig Tree–Even Jesus taught us that faith and action are not separate but always come together.

Matthew 23:23 “But you have neglected the more important matters of the law—justice, mercy and faithfulness. You should have practiced the latter, without neglecting the former.”

When we come to have someone whom we love, we desire to do something for loved one. In the same way, when we have a right faith, it results in action naturally. Then, through what kind of knowledge, we can have the right faith that leads us to God’s salvation? There’s no need to have vague and blind faith that is obstacles on the way to the kingdom of heaven. We truly need true faith which can guarantee the future of the spiritual blessing.

Today, it is impossible for us to listen to the voice of Jesus in person. However, through the Bible, we can receive teachings from Jesus. After hearing Jesus’ words in the Book of Matthew, let’s find the answer to have the faith that we should have like disciples 2,000 years ago.

The knowledge of Jesus’ Second Coming

Matthew 24:3 As Jesus was sitting on the Mount of Olive, the disciples came to him privately. “Tell us,” they said, “when will this happen, and what will be the sign of your coming and of the end of the age?”

Christ Ahnsahnghong Who Fulfilled the Prophecy of Fig Tree–Matthew Cp. 24 is the scene where the disciples are silently listening to the prophecy of Jesus about the fall of Jerusalem. And then, one disciple asked Jesus about the sign of His coming and of the end of age.

Even though the disciples were sitting by Jesus looking at Him, they had a lot of questions about Jesus’ second coming. It was because that Jesus would appear a second time like His first coming. Apostle Paul too wrote about Jesus’ second coming (Heb 9:28). In these days, Many Christians firmly say they love Jesus with their heart and soul. But if they love Him that much, they should show their beliefs by following Jesus’ teaching. Jesus apparently taught us the sign of His second coming through the parable of the fig tree. All these teach that Christ Ahnsahnghong is the true Christ. Let’s study about it. 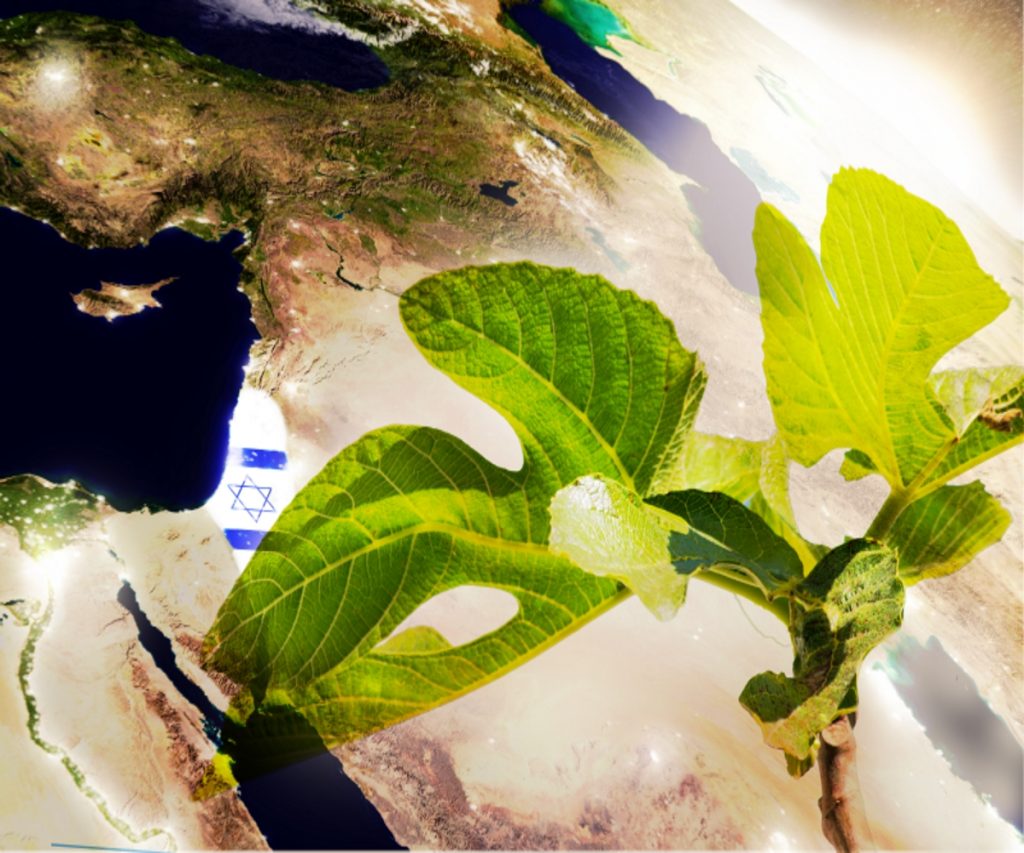 [Lesson from the Fig Tree and Christ Ahnsahnghong]

Matthew 24:32~33 “Now learn this lesson from the fig tree: As soon as its twigs get tender and its leaves come out, you know that summer is near. Even so, when you see all these things, you know that it (or he) is near, right at the door.

Jeremiah 24:5 “This is what the Lord, the God of Israel, says: ‘Like these good figs, I regard as good the exiles from Judah, whom I sent away from this place to the land of the Babylonians.

The exiles from Judah and Jews are the Israelites. In this scene, God regarded those who obeyed God’s command as “good figs.” On the other hand, in verse 8, God considered those who disobeyed God as “poor figs.”

Thus, a fig tree stands for the Israel. Jesus also said we should learn the time when Jesus would come a second time from the fig tree. The fig tree that He mentioned is not a natural tree. If it meant a natural tree, whenever twigs of a fig tree get tender in summer, Jesus should have appeared. The proper interpretation of it can be possible through the mated verse in the Bible (Isa 34:16).

Jesus foretold the destruction of Israel

Christ Ahnsahnghong Who Fulfilled the Parable of Fig Tree–Then, when is Jesus going to come a second time? It’s the time when summer comes, and the twigs of the fig tree get tender and leaves of it come out. Trees look dead in winter until spring or summer comes. Likewise, this word of Jesus implies the destruction of Israel which would happen in the future.

Mark 11:12~14 The next day as they were leaving Bethany, Jesus was hungry. Seeing in the distance a fig tree in leaf, he went to find out if it had any fruit. When he reached it, he found nothing but leaves, because it was not the season for figs. Then he said to the tree, “May no one ever eat fruit from you again.” And his disciples heard him say it.

Mark 11:20~21 Peter remembered and said to Jesus, “Rabbi, look! The fig tree you cursed has withered!”

Did Jesus who was the Creator not know the season for figs to bear fruit? He did know but cursed a fig tree to teach a certain will. The figs without fruit represent the Israel which rejected Jesus. He wanted His disciples to know the future of Israelites by the parable of the fig tree.

Christ Ahnsahnghong Who Fulfilled the Parable of Fig Tree–Let’s get the closer look at direct prophecy about this.

Luke 21:20~24 “When you see Jerusalem being surrounded by armies, you will know that its desolation is near. Then let those who are in Judea flee to the mountains, let those in the city get out, and let those in the country not enter the city. For this is the time of punishment in fulfillment of all that has been written. How dreadful it will be in those days for pregnant women and nursing mothers! There will be great distress in the land and wrath against this people. 24 They will fall by the sword and will be taken as prisoners to all the nations. Jerusalem will be trampled on by the Gentiles until the times of the Gentiles are fulfilled.

In this prophecy, Jesus Christ directly mentions the fall of the city of Jerusalem without using any parable. He prophesies that this is the time of desolation or destruction of Jerusalem.

The fulfillment of destruction of Israel

Christ Ahnsahnghong Who Fulfilled the Parable of Fig Tree–The time of punishment for Jerusalem! Even though Jesus wanted the Israelites to repent by preaching the gospel of the kingdom, the Israelites who are the chosen people walked the wrong way with their own thoughts and ideology. As a result, they crucified Jesus on the cross, and God took the blessings of salvation away from them. The only terrible punishment was waiting for them (Lk 13:7).

The first siege of Jerusalem happened in AD. 68 by a Roman General Vespasian. And then something happened in Rome. Emperor Nero committed suicide. All army retreated to Rome. “When you see Jerusalem surrounded by armies, you will know that its desolation is near (Lk 21:20-24).” The followers of Jesus remembered the words about the fall of Israel. They fled to the city of “Pella” while the other people were thinking Jerusalem is only the safe place.

After General Vespasian had become a new Emperor, he sent out his son, Titus in April in AD. 70. The second siege of Jerusalem happened again. The city of Jerusalem became isolated from all outside contact, and the people inside perished by famine. And more terrible things occurred. Jerusalem fell on September 8th according to the Jesus’ prophecy (Mt 24:2). 1.1 million people died by the sword, and 97,000 people became captives.

Restoration of Jerusalem and the nation of Israel

Christ Ahnsahnghong Who Fulfilled the Parable of Fig Tree–Then will Jerusalem be in ruin for good? No, along with the fall of Jerusalem, he also taught the disciples about the restoration of the nation of Israel.

Luke 21:24 “ …… Jerusalem will be trampled on by the Gentiles until the times of the Gentiles are fulfilled.”

As Jesus cursed the fig tree, The Israel was destroyed and conquered by nations for 1,900 years, but the time when Israel would be independent was also implied. Jesus said, “Learn from the figs.” As we learned so far, the reality of the figs is the Israel. What a great prophecy! God fulfilled His words. The Israel became independent on May, 14th in the year of 1948. The Prime Minister, Ben-Gurion proclaimed the independence of Israel. Many people think this as one of the historical events in the world. Then, why did God help the restoration of Israel? Because it was to announce the appearance of Second Coming Jesus.

The time of Jesus’ Second Coming and Fulfillment by Christ Ahnsahnghong

Matthew 24:32~33 “Now learn this lesson from the fig tree: As soon as its twigs get tender and its leaves come out, you know that summer is near. Even so, when you see all these things, you know that it (or he) is near, right at the door.

Christ Ahnsahnghong Who Fulfilled the Parable of Fig Tree–The Bible is surely the book of prophecies to recognize the Christ Ahnsahnghong (Jn 5:39). The Book of Matthew Cp. 24 is the important prophecy for us who live in these last days. Then who on earth is the true Second Coming Jesus who came in 1948? It’s Christ Ahnsahnghong who got baptized in 1948 at the age of 30. Christ Ahnsahnghong restored the new covenant of the Passover which Emperor Constantine abolished in the council of Nicaea.

John 10:37~38 Do not believe me unless I do the works of my Father. But if I do them, even though you do not believe me, believe the works, that you may know and understand that the Father is in me, and I in the Father.”

Christ Ahnsahnghong Who Fulfilled the Parable of Fig Tree

Christ Ahnsahnghong Who Fulfilled the Parable of Fig Tree–If you are hard to believe in Christ Ahnsahnghong, please look at the path of the gospel he walked. Do you know? First Coming Jesus already foretold His second coming saying, “I have a baptism to undergo, and how distressed I am until it is completed! (Lk 12:50).” If we believe in Jesus, we should abandon our fixed ideas and confirm the Bible to know whether He is Christ or not. Our life of faith is to receive the blessings of God.

Which was much more important between the words of religious leaders and the Bible prophecies in those days? God don’t want for you to follow the footsteps of Jews who rejected Jesus. Let’s have the knowledge of the Second Coming Christ and receive salvation. Remember the voice of God, “My people are destroyed from lack of knowledge,”